(Paul Collier changed his name to Paul Wittjung in 2010)

The Catholic Worker on Wheels, or CWOW, began serving hot breakfasts in 1984 to residents and neighbors of the Oxford St. Inn night shelter for men in Syracuse, NY.  For over nine years we parked in front of the “Ox” every Sunday and holiday morning serving our famous breakfast sandwiches of egg, cheese and sausage on a grilled Thomas’ English Muffin, along with a seasoned potato patty, fruit, coffee, hot chocolate and other treats as were available. 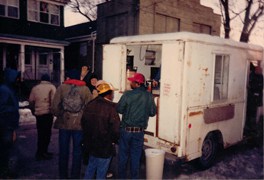 Charlie Belden and I bought a battered Ford step van with a grill from a old farmer who had been using it to cook hot dogs and hamburgers at auctions. We coughed up a $1000 and a lawn mower for it and thus began the CWOW.

From the beginning, it was a community endeavor. The idea for a breakfast truck was put forth by good friend Dick Keough and the name from another friend, Harry Murray.  Harry was also our first volunteer. There were countless other volunteers in those early years: Ron Jaworski, Bob and Betty Belge, Debbie Pillsbury, Fred Head, Kathleen Rumpf and LeMoyne College students just to name a few. Craig and Katherine Polhamus volunteered every other Sunday for two years and Paul Welch with Catholic Charities offered support for a number of years.

On May 3, 1986, my volunteer helper was Carole Hayes. A couple hours later Carole and I were married at St. Vincent’s Church.  Bill Cuddy officiated and Charlie Belden was best man. We had served the sandwiches that morning on our wedding napkins, as we did for our next few anniversaries.

Carole and I were able to offer hospitality in the Catholic Worker tradition by sharing our new home with others and have had guests stay with us for a few days up to two years. Charlie Belden lived with us for the last year of his life, passing away in 1990 at the age of 44.

For over a year we also served four inner city families full course breakfasts every Sunday after finishing at the Oxford. They ordered a week in advance from a menu and their meals were cooked near their house. Carole would bring them in, set up the table, and give them the morning paper and often, flowers.  Fr. John Schopfer suggested the families to us.

The CWOW was present at several picket lines supporting strikers and at various peace actions. One cold, fall morning at Griffiss Air Force Base, Phil, Dan and Jerry Berrigan all came on the truck together to get warm and have some coffee and pastry before getting arrested with others in an act of civil resistance.

After five years our original truck died and we got another one, a little newer, a little bigger, this time with two grills and a fridge. That one also died after about five years and that was the end of the CWOW in that form. We had been serving 100 breakfasts every Sunday and holiday morning to residents of the Ox and a few neighbors. 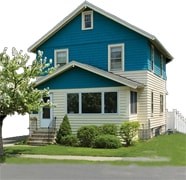 The CWOW was later revived when we began serving breakfast in our Wadsworth St. home to four men from the Ox every Sunday. Carole would pick them up at the Ox, we would enjoy a full-course, leisurely breakfast and then retire to the living room to watch a late-run movie on pay-per-view. After that, Carole would take them wherever they wanted to go.  Our letter carrier, Danielle, helped us often with our servings and was much loved by the men.

We did that for about three years until Carole had an accident and we needed the dining room for a hospital bed.  During her convalescence we built a sunroom on our back deck, bought some booths formerly used at Appleby’s, and named it the Ray McVey Breakfast Room.  This time around, the CWOW was known as the House of Wittjung Catholic Worker.

We purchased a 12 passenger van and began transporting two families and a few individuals to our home every Sunday morning. My driver was friend and neighbor, Milt Mierzwa. Our dining room was wall-to-wall buffet, with a wide variety of hot breakfast foods and drinks. After visiting the buffet, guests would retire to the breakfast room where orders were taken for eggs and omelets. Two young people were our steadfast volunteers, Jenna Lacey, and nephew Robert Collier. Danielle also helped whenever she could.

Milt would pick up our guests to arrive at 8:00 am and then take them home around 9:30. At that time a second shift would come in, mostly children from the neighborhood. A few other guests would also pop in, most notably our dear friends Bob and Betty Belge.

We were also open on Saturdays for friends who could drop by. We had a donation box for those able to help with expenses.

After two and a half years, when our families had moved and our servings reduced, we began delivering daily breakfasts to people living on the streets, under bridges and in homeless encampments in Syracuse. Our breakfast sandwiches were resurrected as was our name, Catholic Worker on Wheels.

In the beginning, we served seven days a week. Our breakfasts consisted of our hot sandwich and potato patty, coffee, and a bag with pastry, orange juice, fruit, cookies and some chocolate. As an occasional substitute for a sandwich, we would offer frittatas or pancakes or omelets in to-go containers.

We have now been making our Monday through Friday deliveries for three and a half years. On Saturday mornings we cook full-course meals ordered by phone from a menu. Most of our Saturday deliveries (over 20) are to the apartments of friends who were previously homeless and a few neighborhood families.

We recently began cooking our Saturday breakfasts in the kitchen of St. Lucy’s church in Syracuse, with several parishioners volunteering. Father Jim Mathews, pastor, has been distributing meals with Paul on Fridays since the beginning and has been a major supporter as has the entire St. Lucy’s Parish.

Carole and Paul are tremendously grateful for all the support we have received from friends and well-wishers over many years. It has been a blessing to be able to share our little Catholic Worker ministry with other caring people.